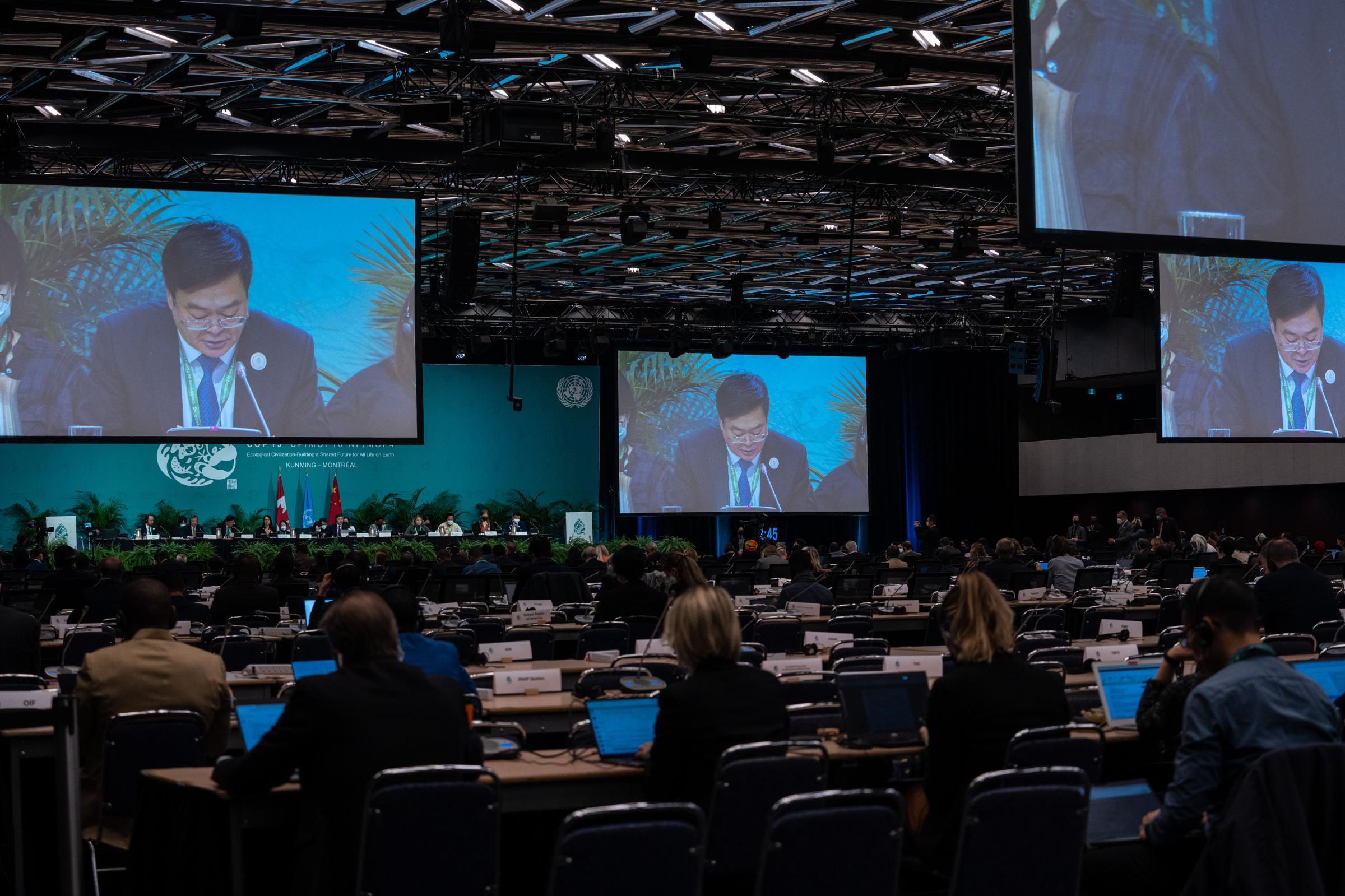 A plenary session on the second last day at the COP15 biodiversity summit in Montreal, Canada on December 18, 2022. 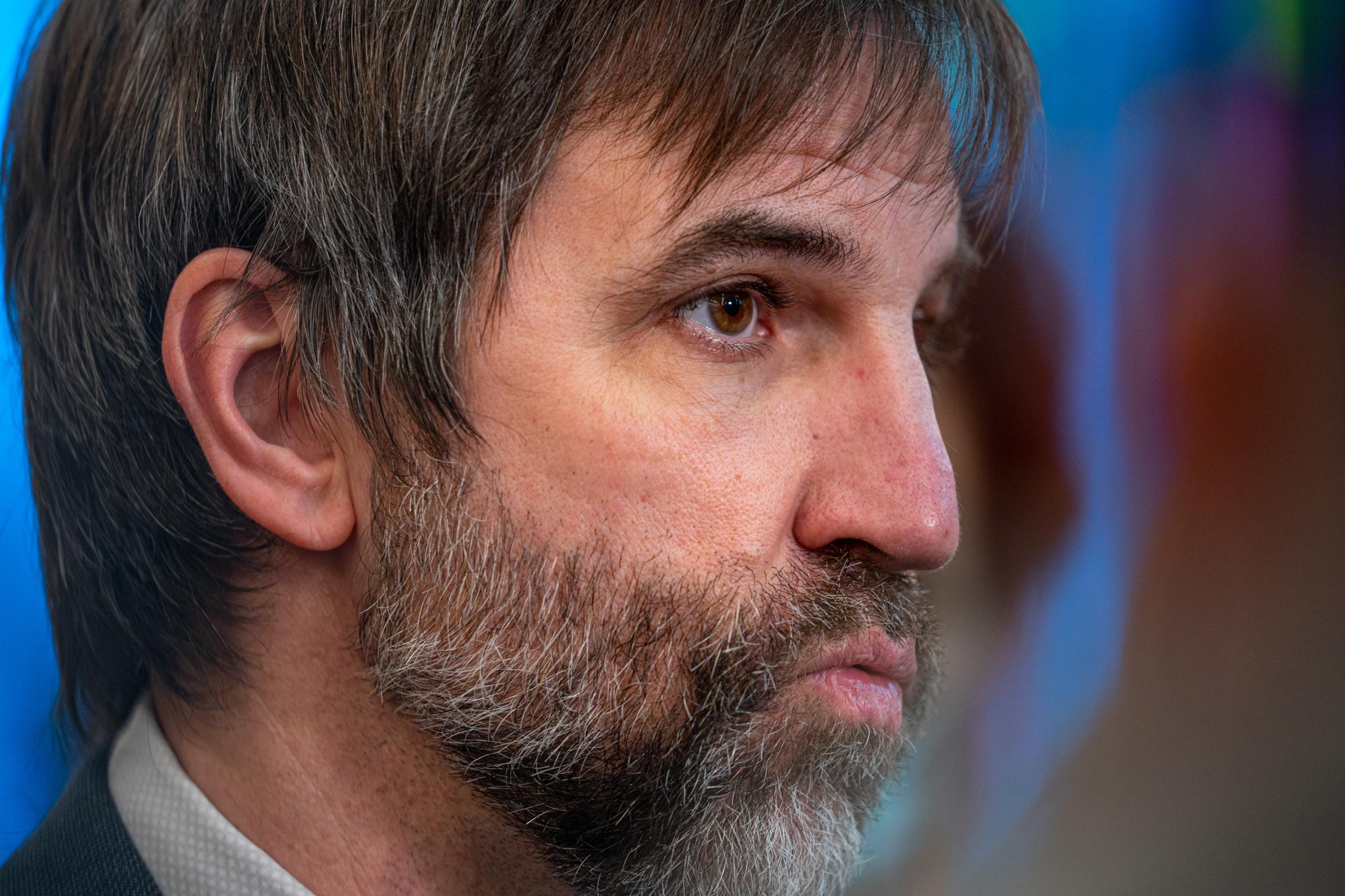 Canada’s Minister of Environment Steven Guilbeault speaks with journalists at a media scrum during the last hours of the COP15 biodiversity summit in Montreal, Canada on December 19, 2022. 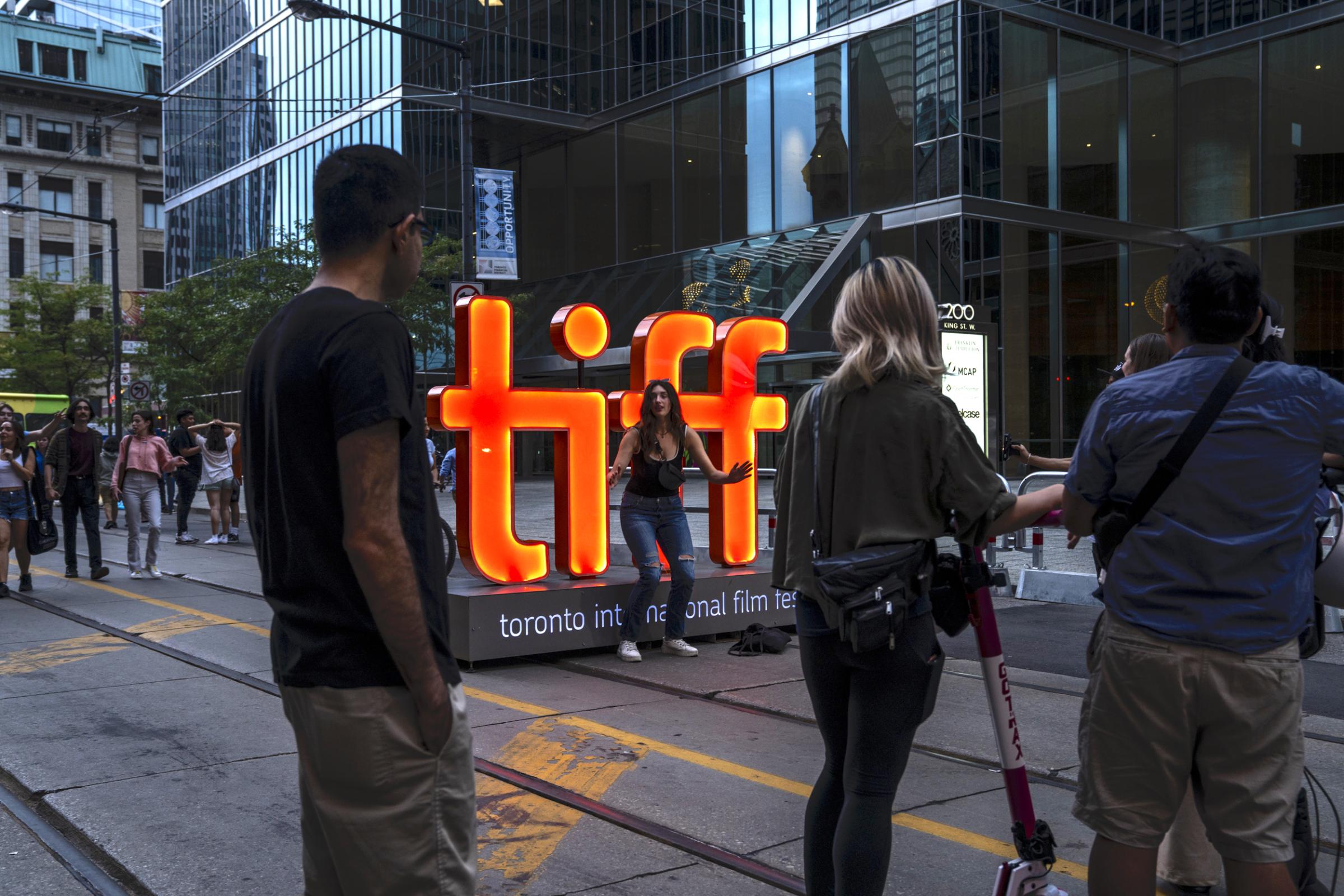 Attendees of the annual Toronto International Film Festival (TIFF) pose for a photo in front of the brightly-lit sign at the festival's entrance in Toronto, Canada on Sept. 12, 2022. 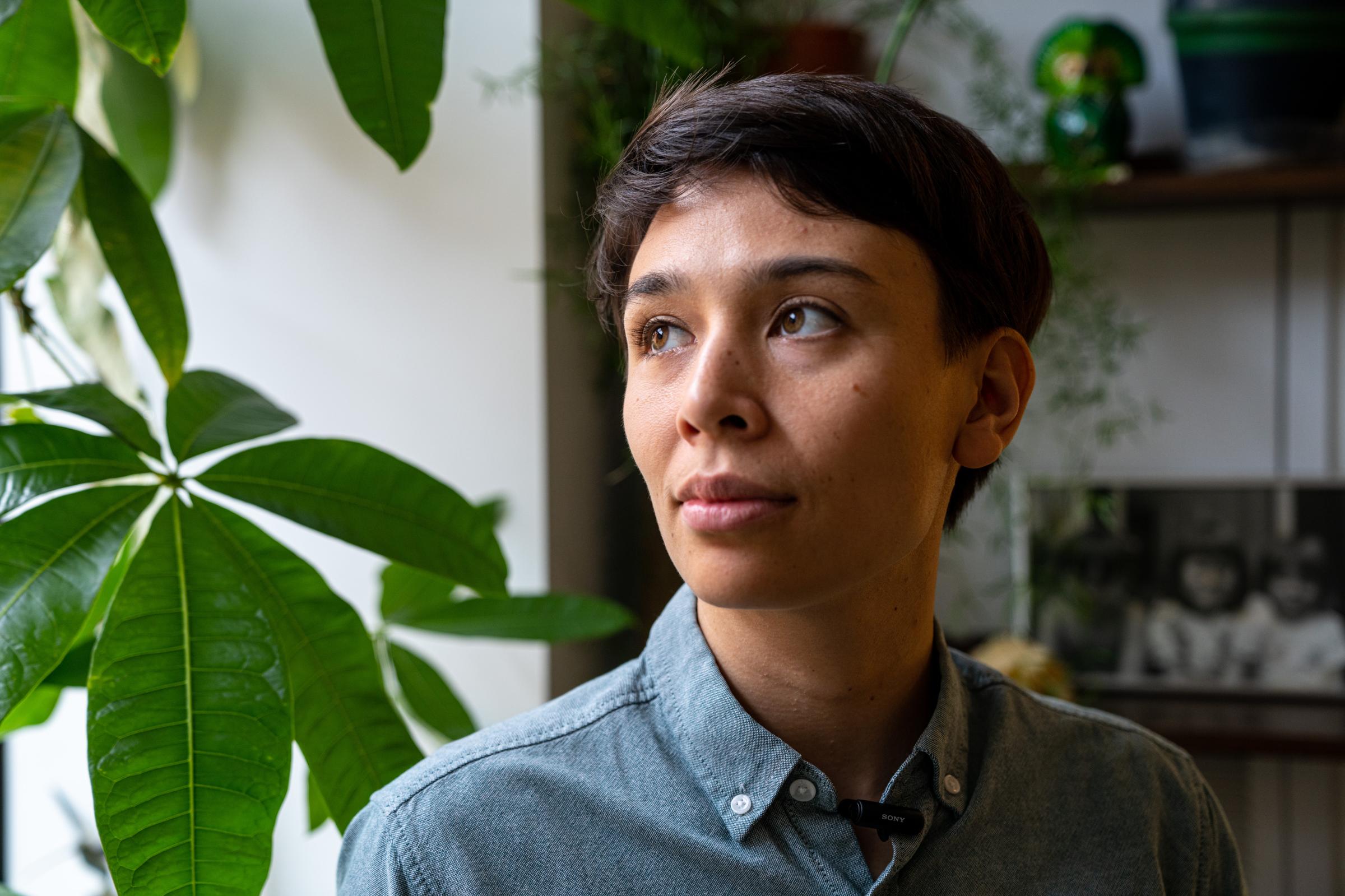 Kimiko, author of 'Kimiko Does Cancer,' looks out the window of her home in Toronto, Canada on October 6, 2022. Having undergone breast cancer, she wrote a graphic novel to challenge the stereotypical depictions of cancer patients in the Canadian healthcare space. 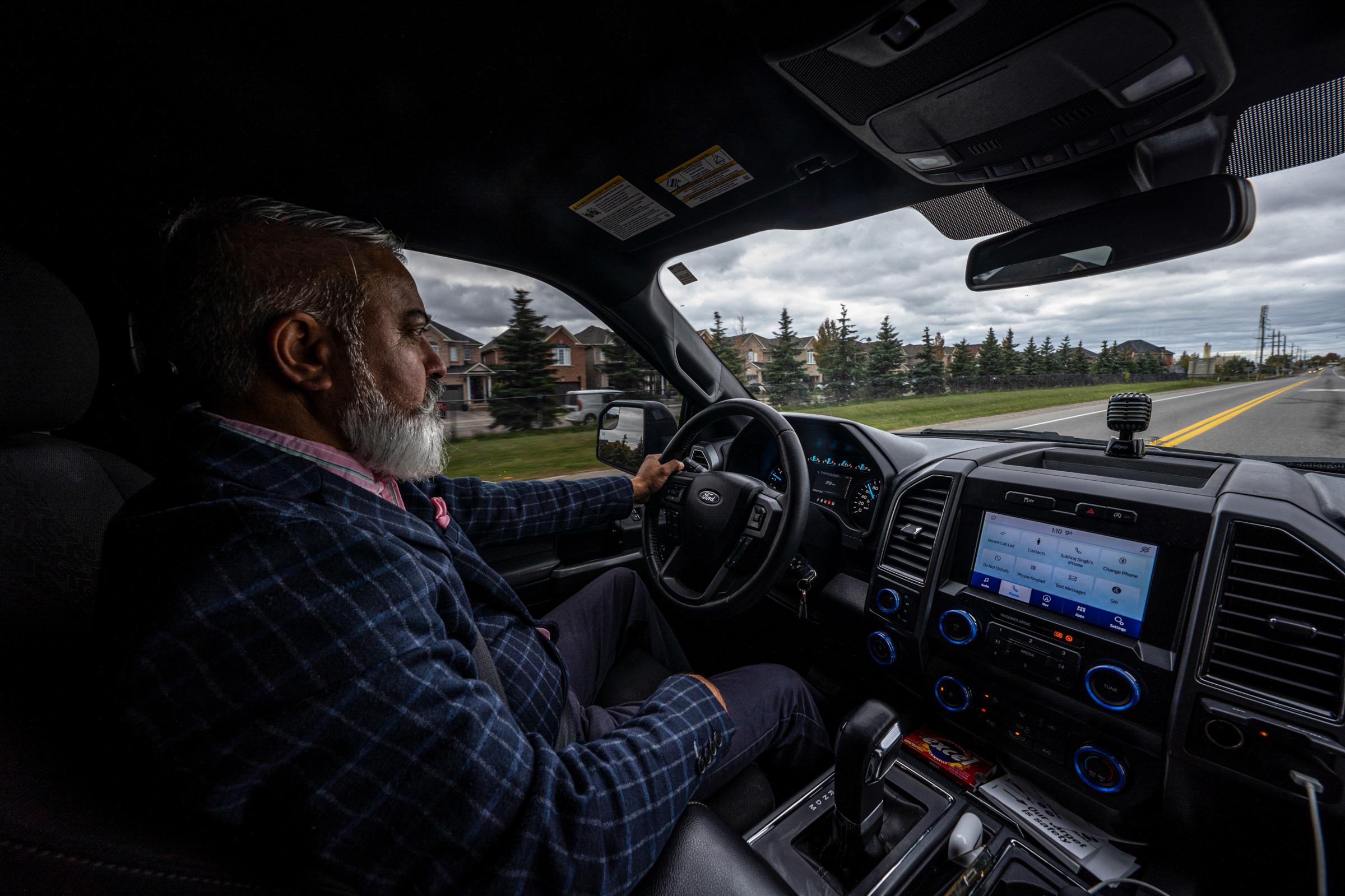 Sukraj Sandhu, a truck driver from Brampton and vice-president of AZ Canadian Truckers Association (AZCTA), drives along the streets of his home in Brampton, ON on October 8, 2022. Sandhu is one of the trucking community advocating for the proposed Highway 413 route along Vaughan to Mississauga. 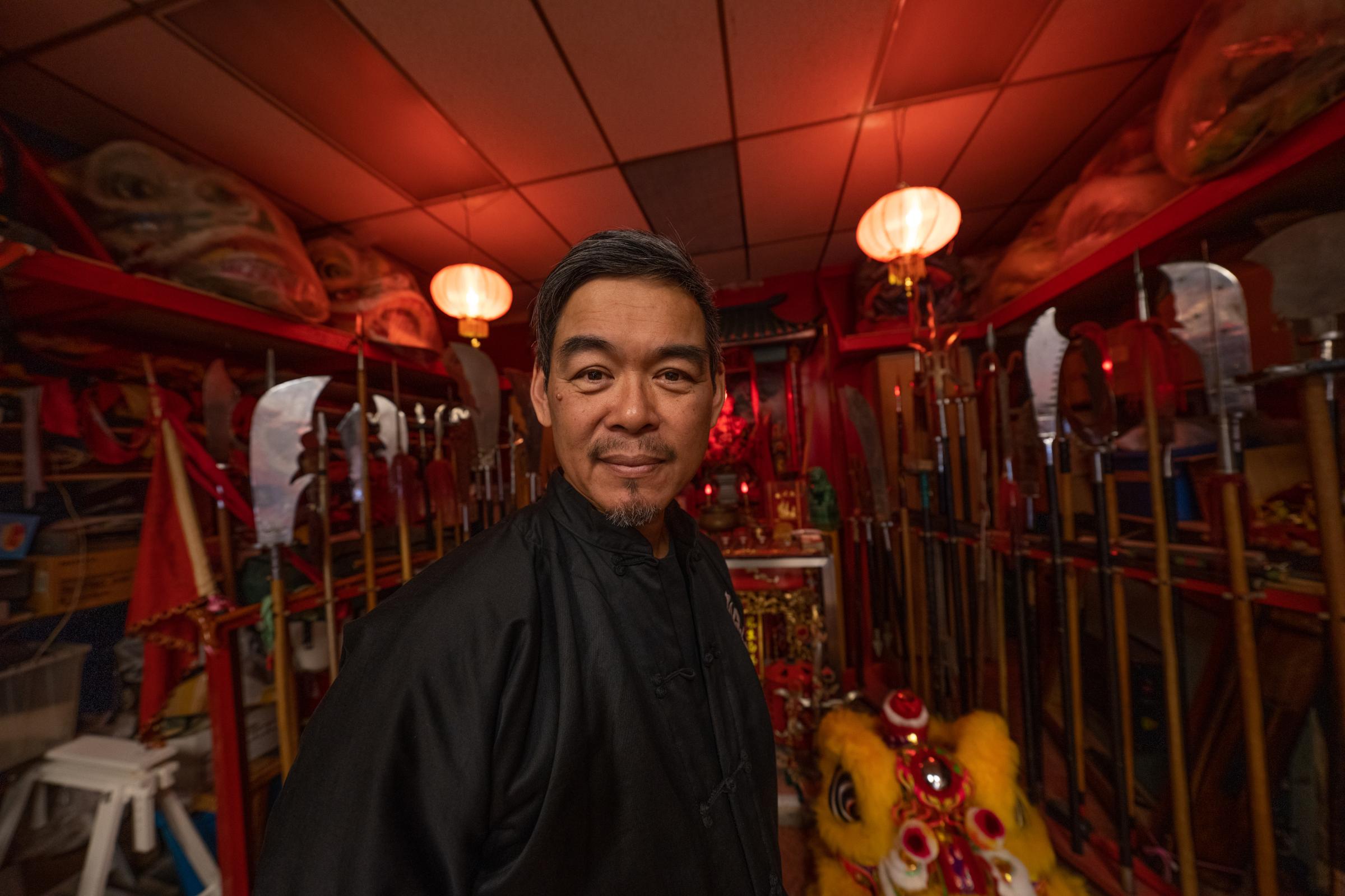 Rick Wong, one of the teachers at Hong Luck Kung Fu Club, standing in front of the studio’s ancestral shrine on December 11, 2021. Hong Luck Kung Fu Club is a multi-generational martial arts studio in Toronto’s Chinatown, which started in 1961. With Chinese New Year around the corner, this group is preparing for lion dance performances for the local senior community, as a symbolic act to bring in health, luck, and life. 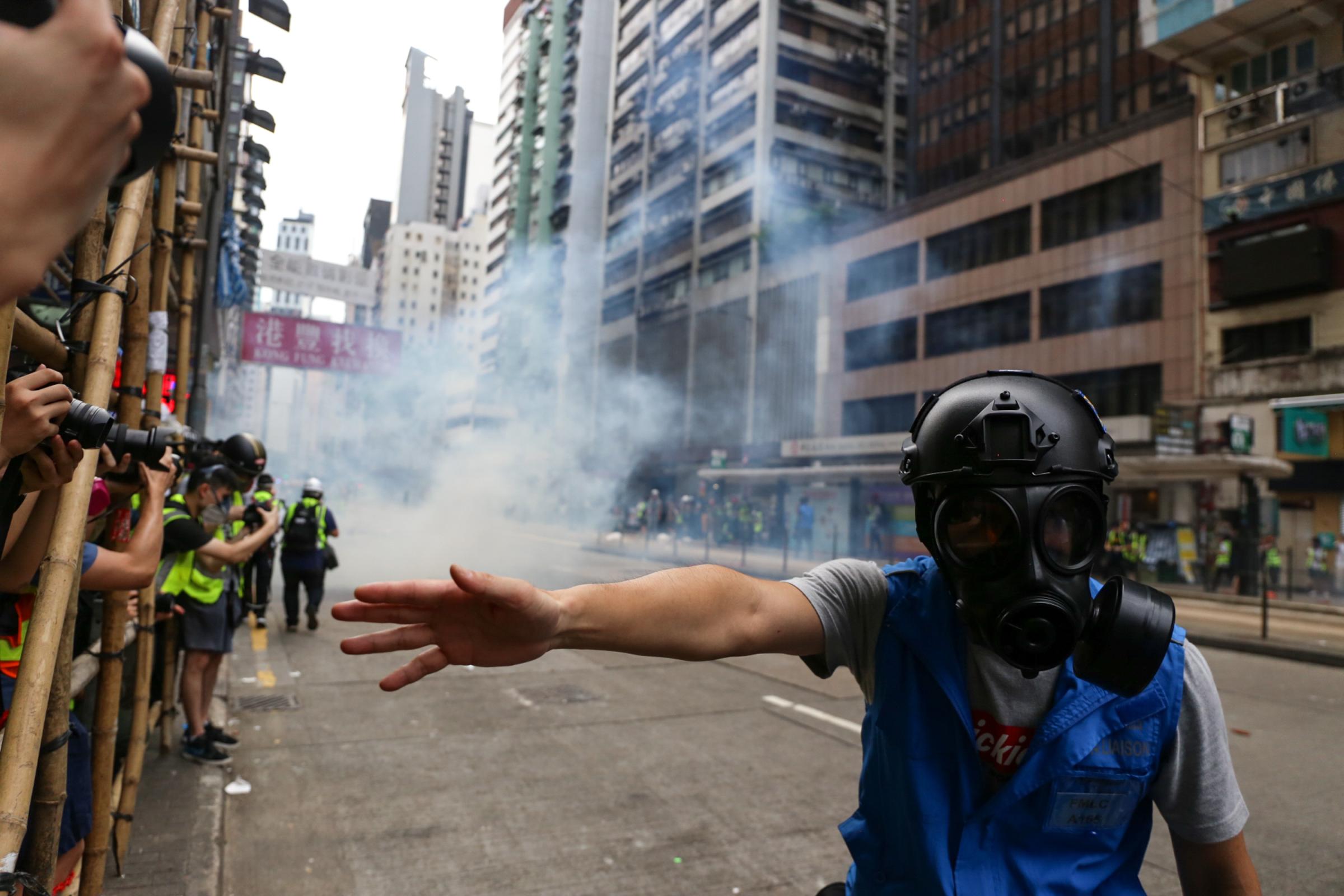 A member of the police media liaison pushes back journalists as tear gas is fired in the background in Wan Chai, Hong Kong on July 1, 2020. On the first day of the passing of the National Security Law, protests erupted across Hong Kong. In 2020, the ranking of press freedom in Hong Kong dropped to the 80th place, with increasing pressure and constrictions on media. Hong Kong S.A.R. China 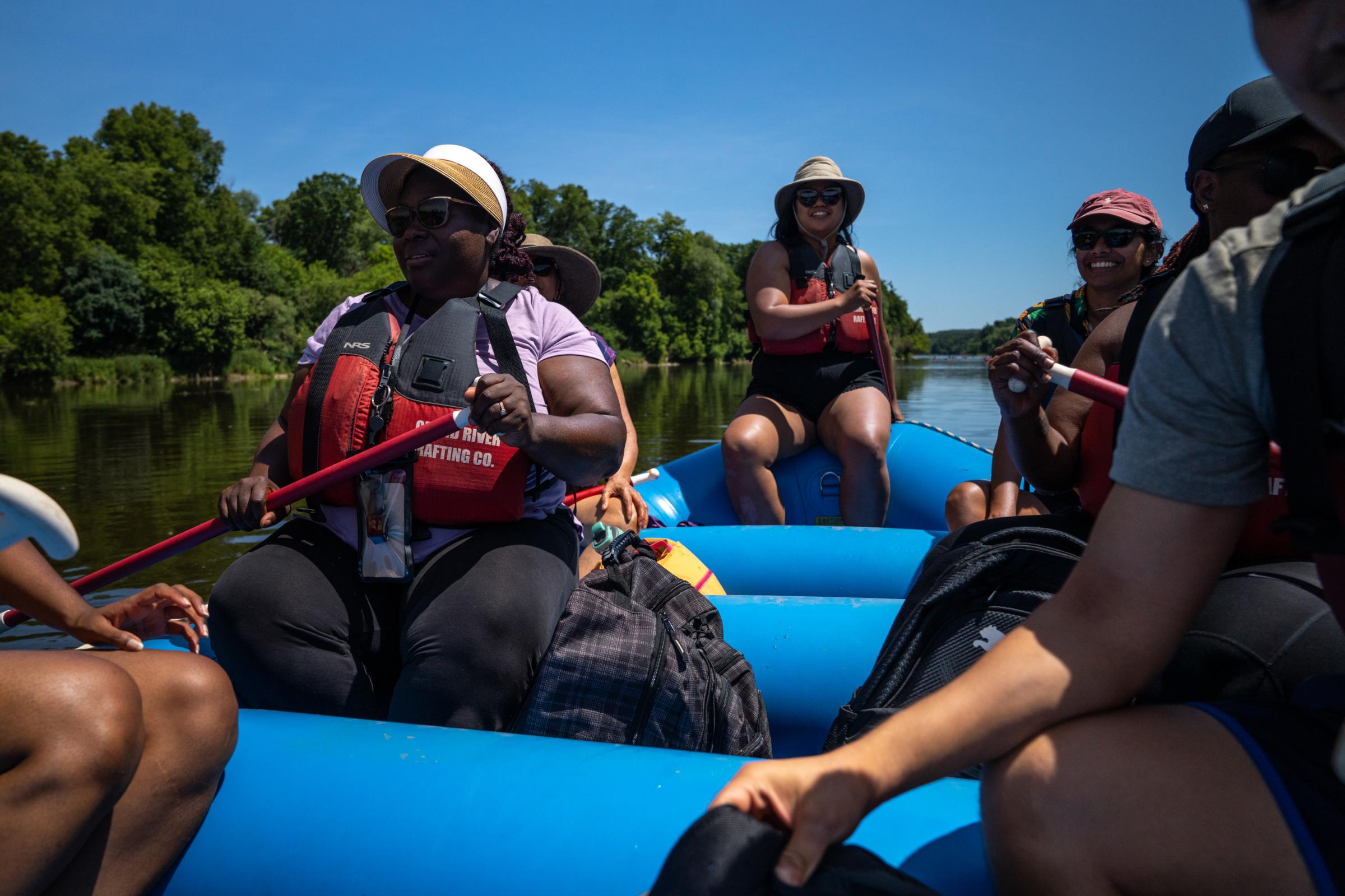 Rafting participants steering the raft in the Grand River in Brant, ON on June 25, 2022. Colour the Trails, a collective of BIPOC and LGBTQ2S+ adventure seekers, held its first summer outdoor rafting trip in its inaugural year. 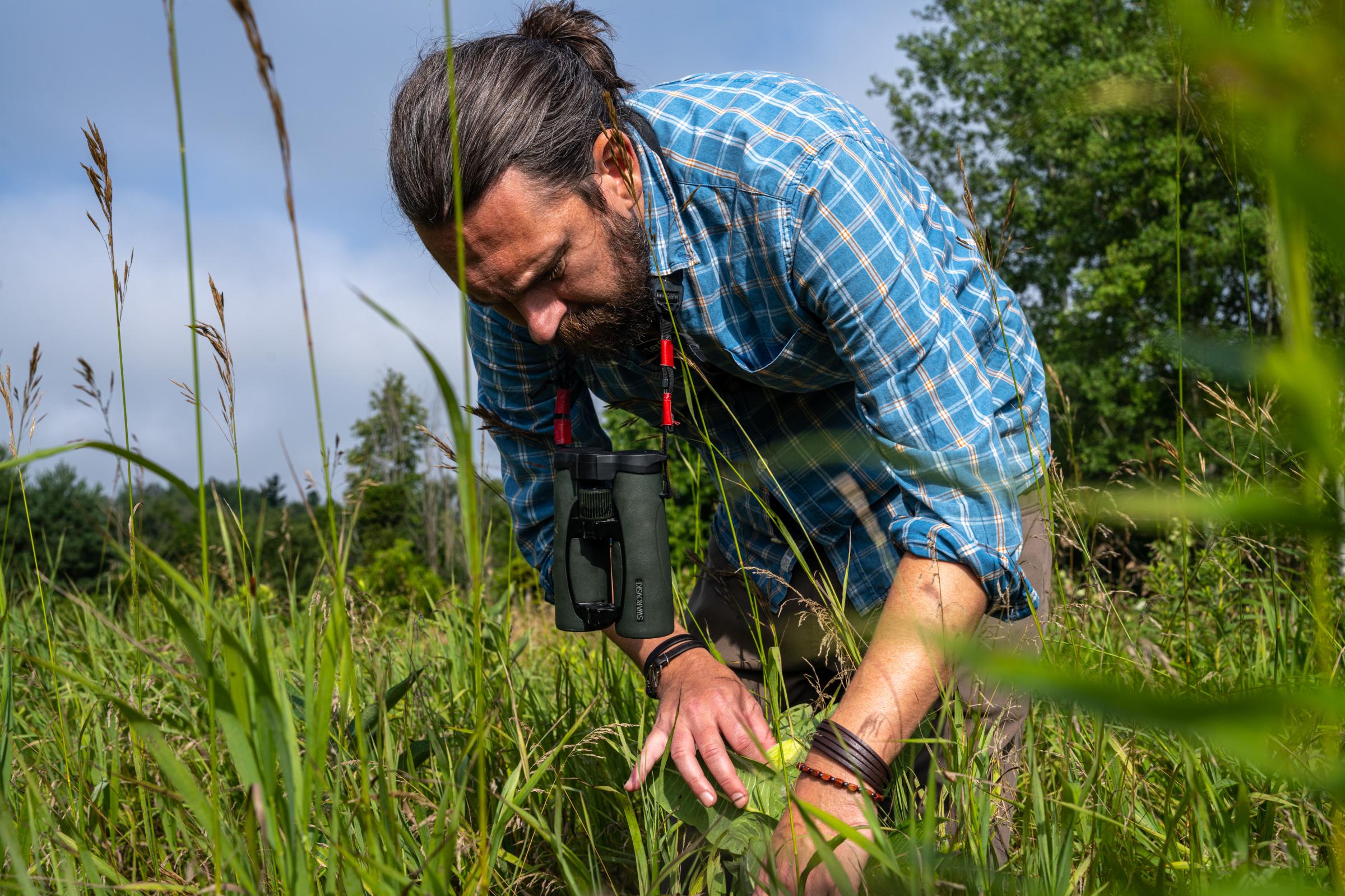 Professor Ryan Norris from the University of Guelph looks for monarch butterfly eggs on the underside of milkweed plants at the Nashville Conservation Reserve on August 6, 2022. The protected space is an area that the proposed Highway 413 would cut through, which has been heavily criticized by environmentalists and scientists. 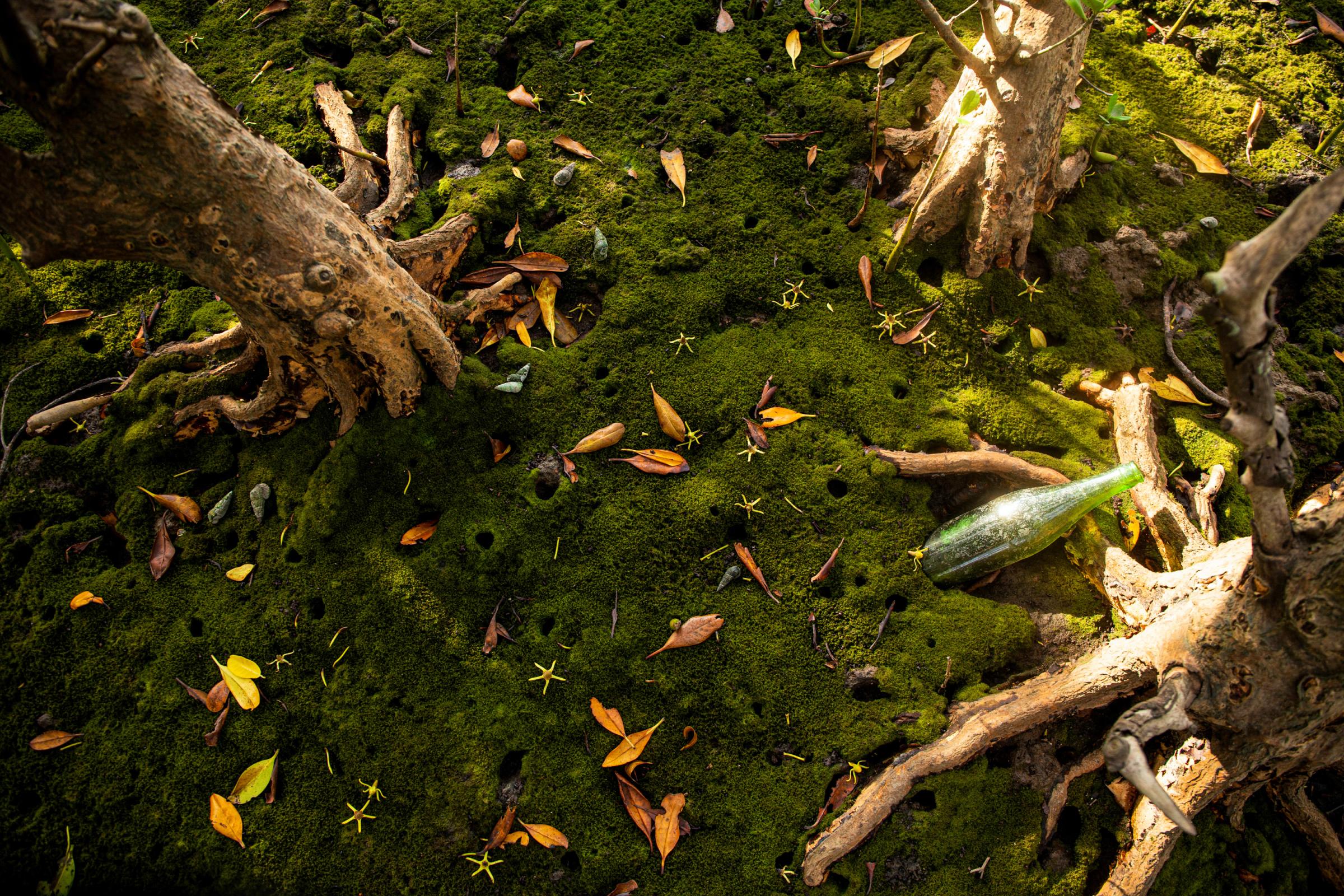 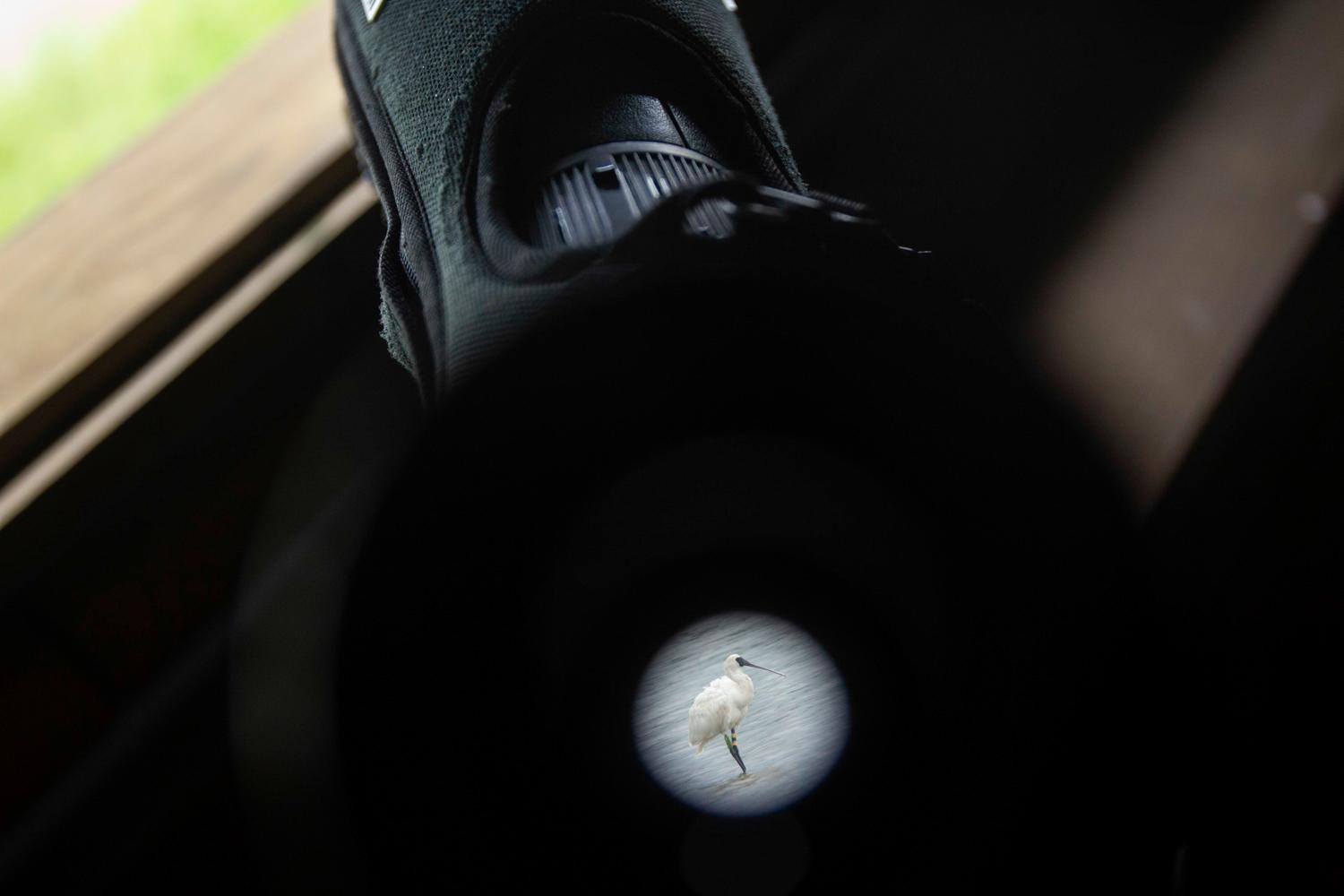 A Black-faced Spoonbill (Platalea minor) can be seen through a telescope from a birding lookout at the Mai Po marshes in Hong Kong on September 18, 2020. Every year, an estimate of 60,000 birds make their annual winter migration to roost in Deep Bay. Hong Kong S.A.R. China 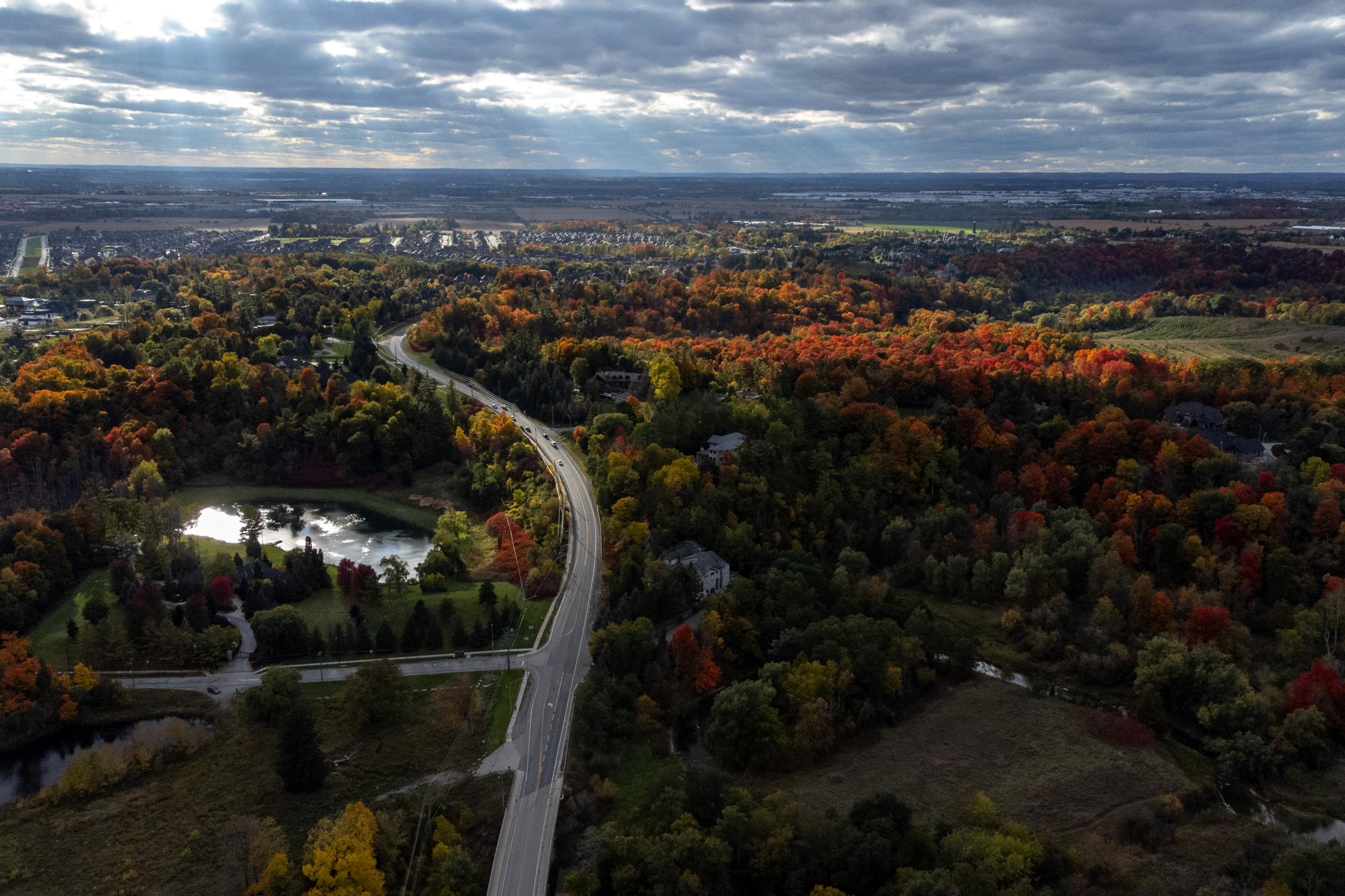 Nashville Conservation Reserve aerial view in Nashville, ON on October 8, 2022. 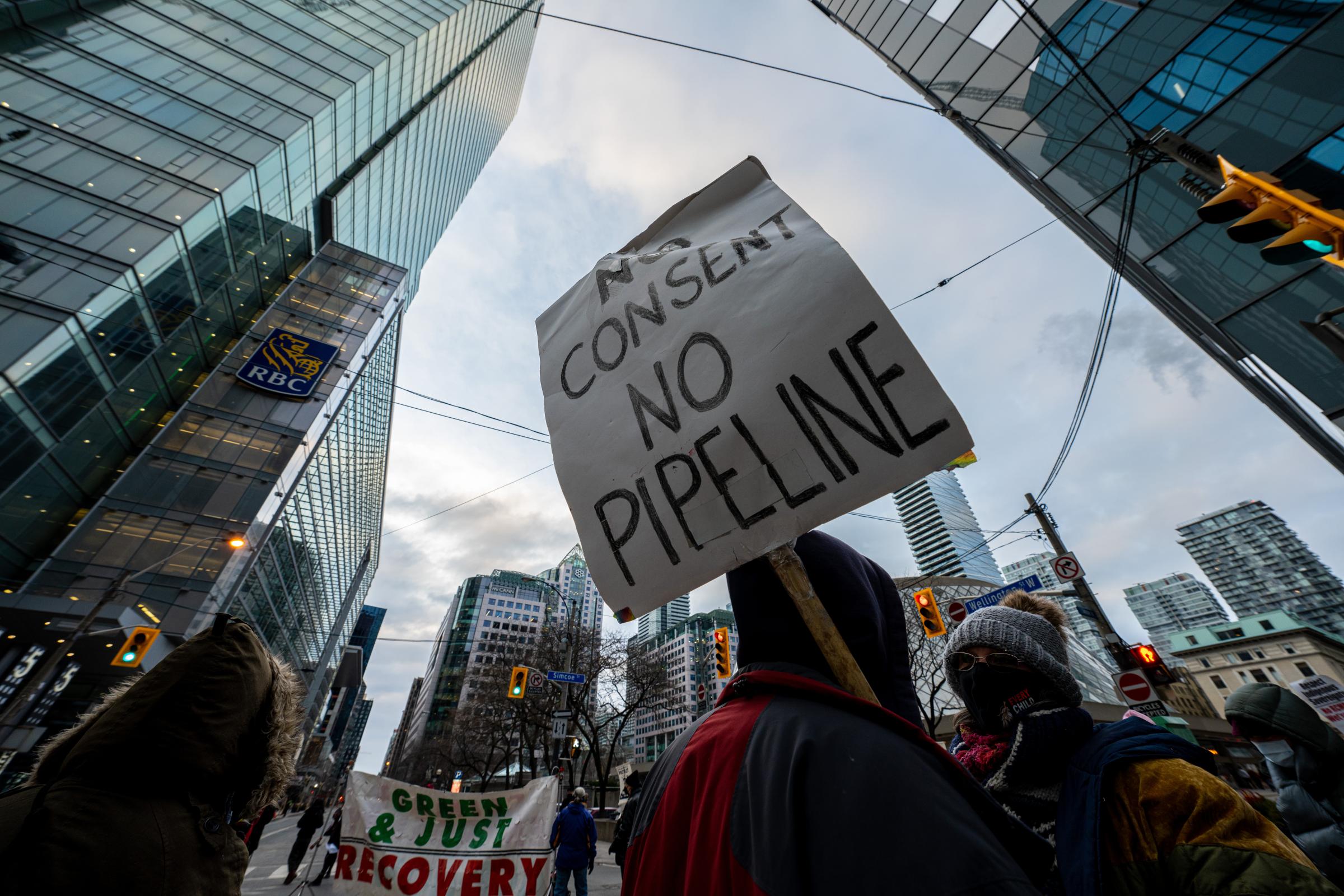 Protesters gather outside of the RBC Centre in downtown Toronto, Canada in solidarity with Wet’suwet’en Land Defenders on December 12, 2021. Their demands are for RBC to defund the Coastal GasLink pipeline and respect Indigenous sovereignty. 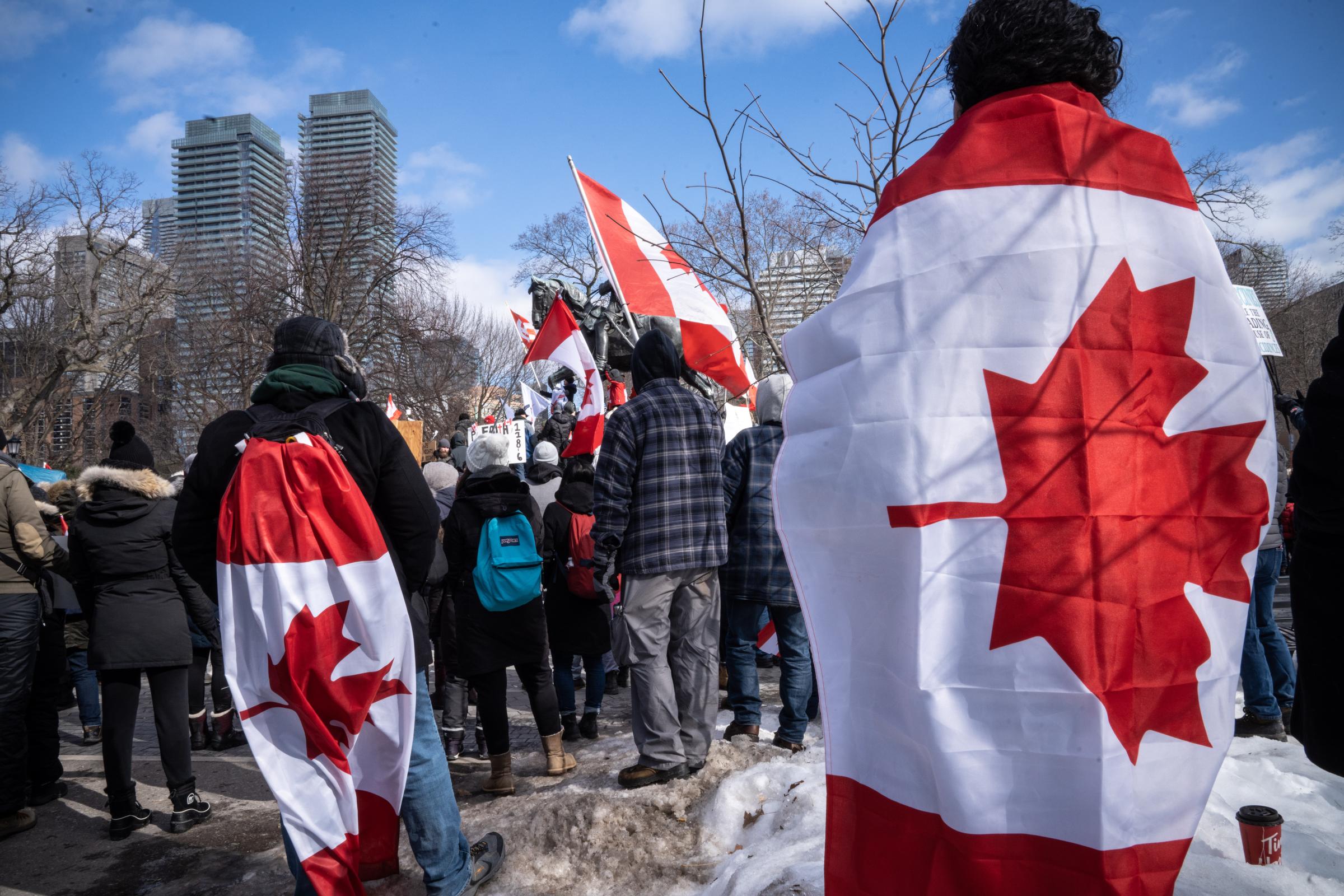 Protestors wearing Canadian flags listen to rally speakers. Trucker convoy protesters gather in Queen’s Park, Toronto for the second consecutive weekend in solidarity with anti-mandate demonstrations on February 12, 2021. It comes after the province declared a state of emergency in relation to the ongoing blockades, with Toronto police setting up road closures across the city. 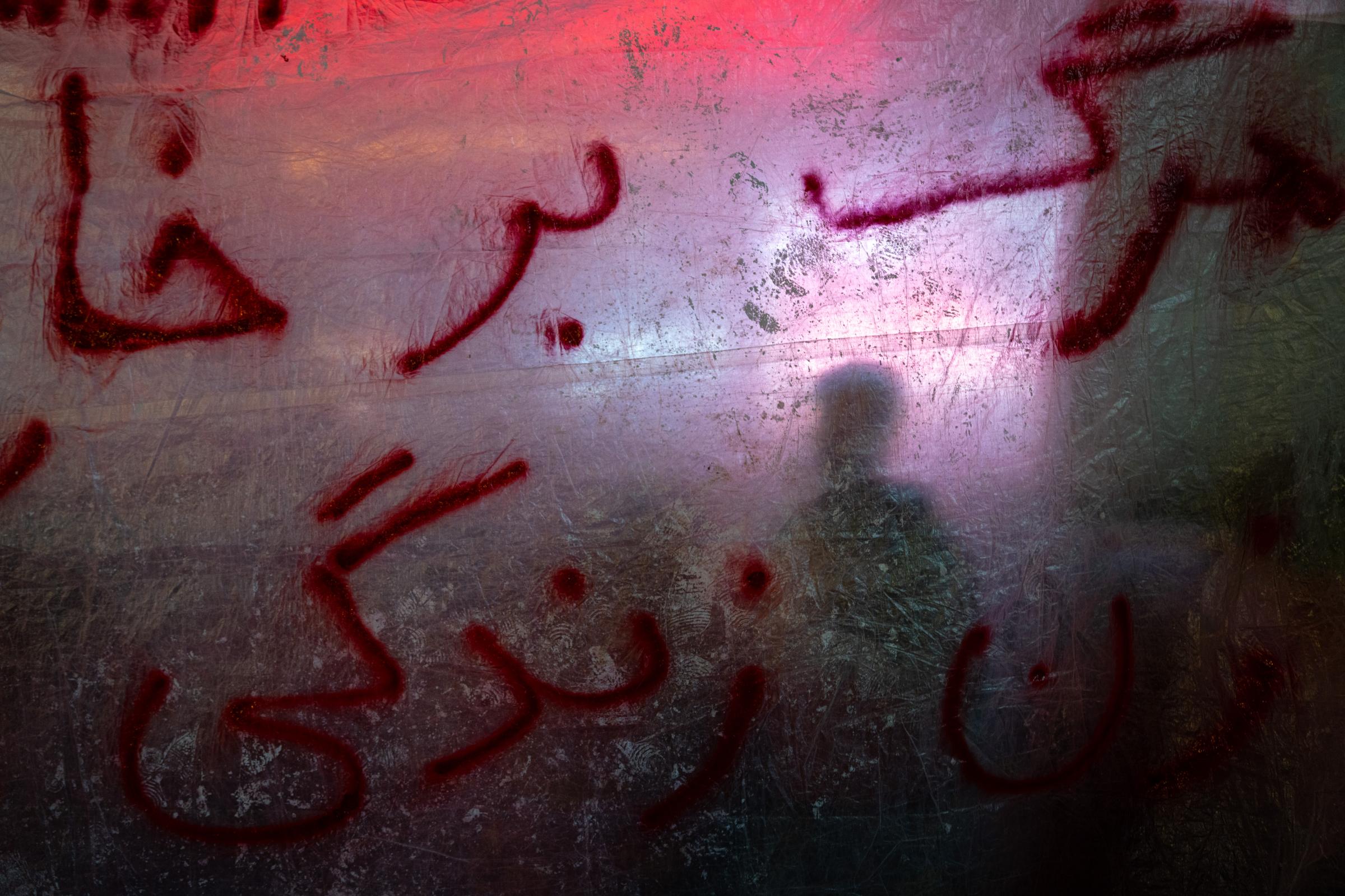 An Iranian protester can be seen backlit from a protest banner calling for freedom in Toronto, Canada on September 23, 2022. Demonstrations erupted across the globe after 22-year-old Mahsa Amini was arrested by Iran's morality police for “improperly” wearing her hijab and died three days later while still in police custody. 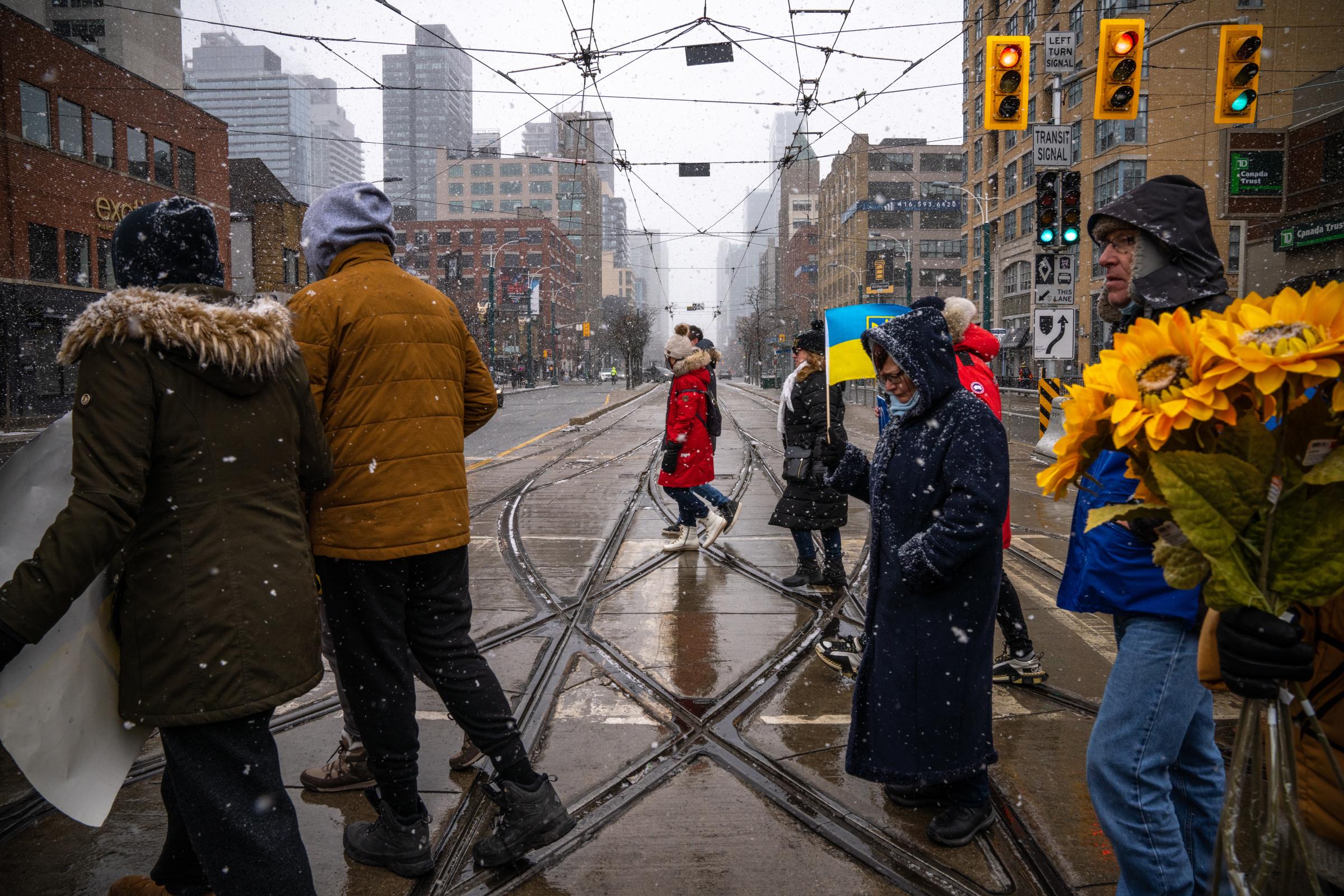 A woman in a red coat crosses the street in front of protestors as thousands march to the US Consulate for a “No Fly Zone” rally in Toronto, Canada on March 14, 2022. Global protests were organized around the world following Russia’s invasion of Ukraine. 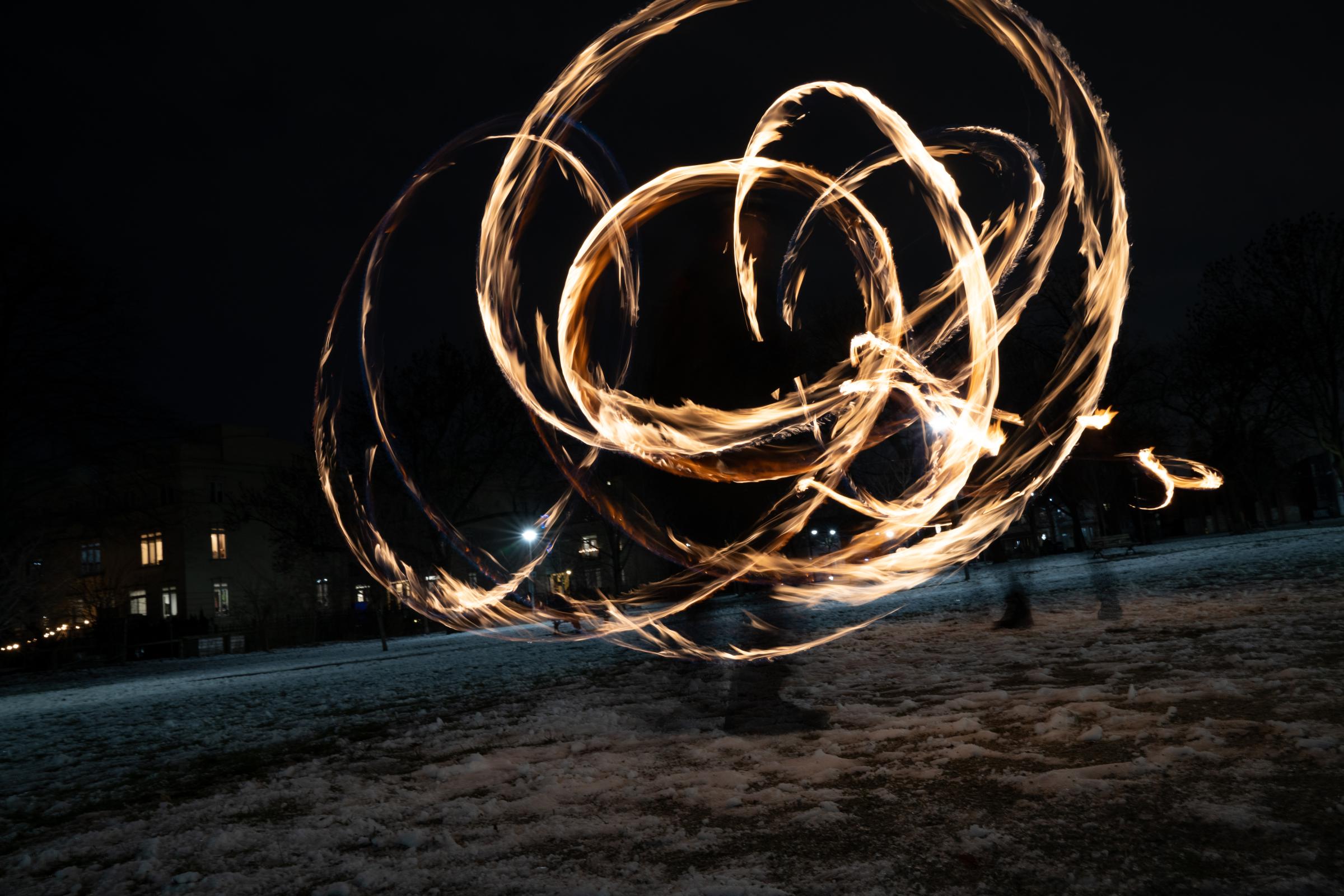 Rick Wong, a teacher at the Hong Luck Kung Fu Club, fire spinning as a performance of light on winter solstice, the longest night of the year, on December 21, 2021. 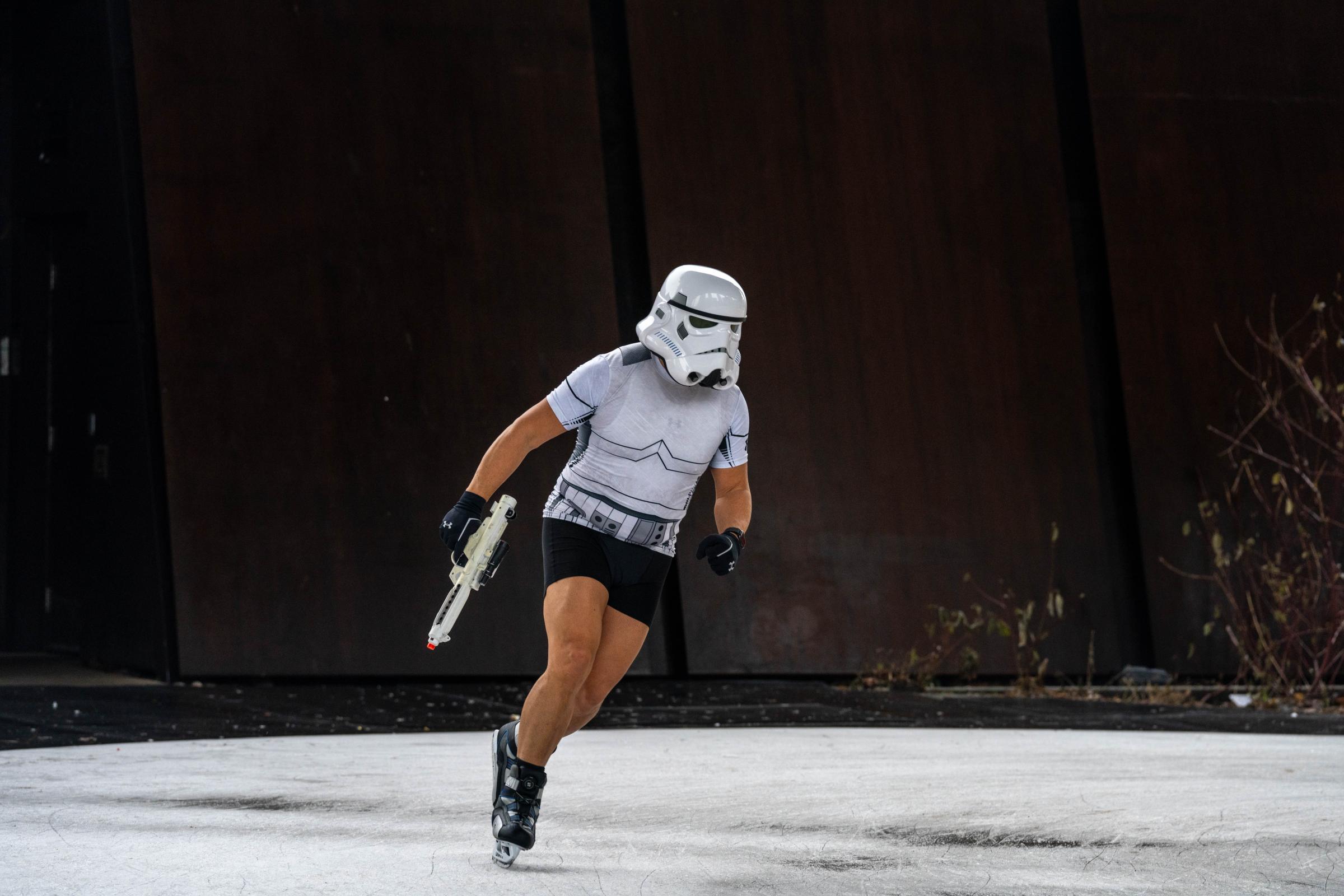 An ice skater wearing a Storm Trooper helmet and holding a toy blaster skates along a frozen trail in Toronto, Canada on December 31, 2022. The Beltway Polar Bear Skate is a clothing drive organized by The Beltway Conservancy to collect warm winter clothes and celebrate the end of the year under the Gardiner Expressway. 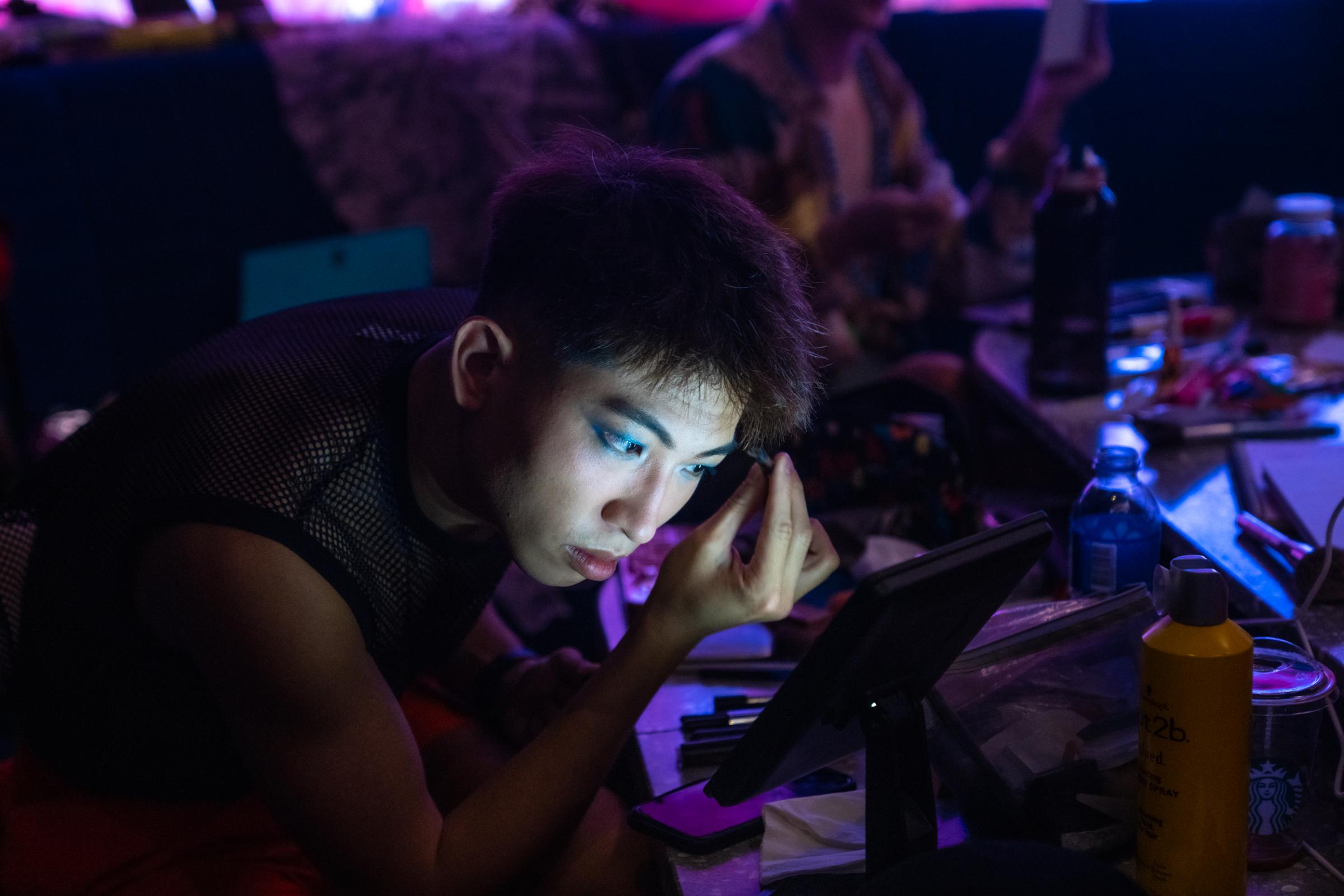 The LGBTQ+ organization Drag Jam hosts the August ‘Drag Discovery Channel’ at Lambda Lounge, under the time of Miami Nights in Central, Hong Kong on August 22, 2021. 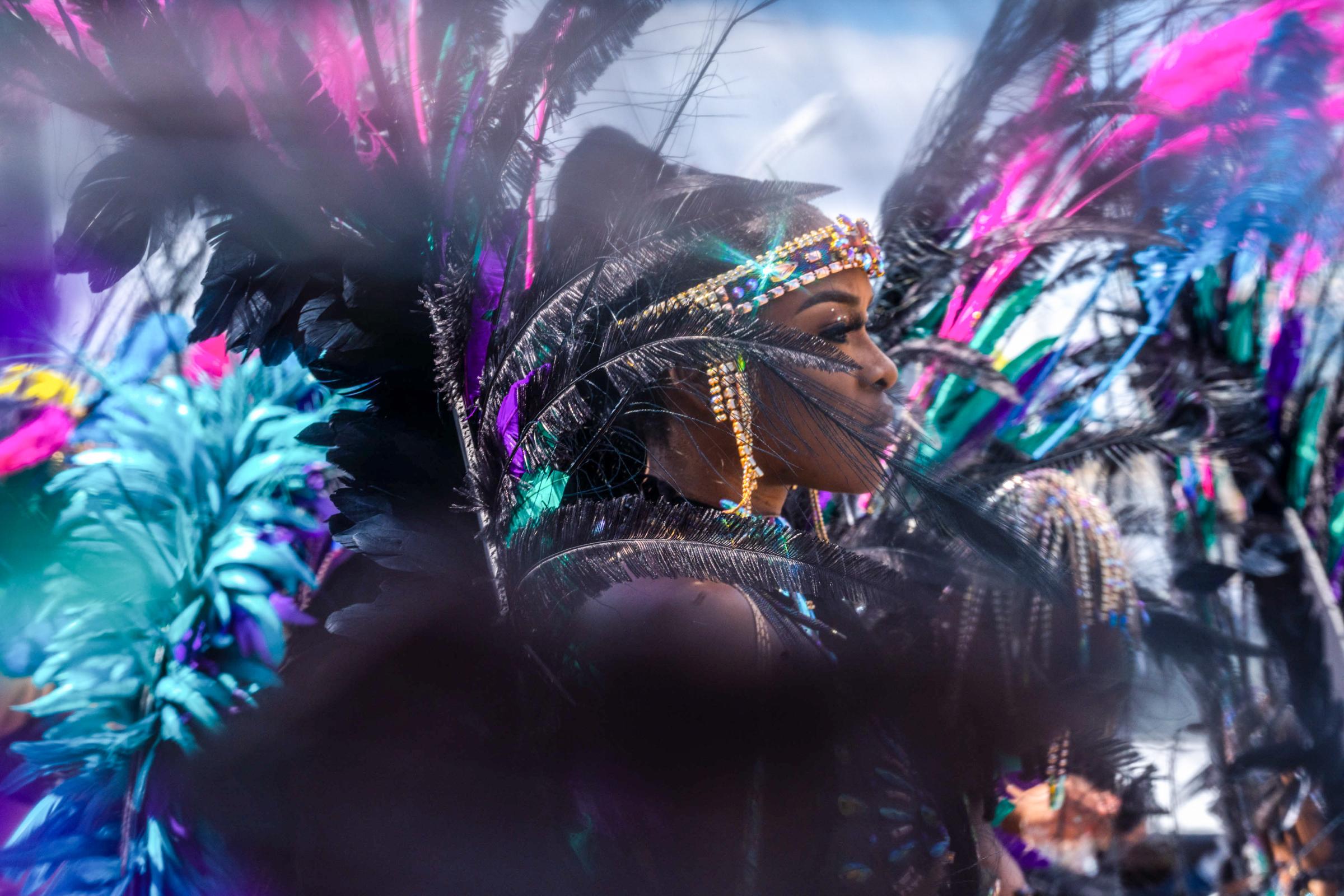 A parade participant dressed in colourful clothing and feathers, framed by the feathers of another individual takes part during the Caribana Festival in Toronto, Canada on June 30, 2022. Following two years of lockdown from the COVID-19 pandemic, the Toronto Caribbean Carnival returned with the extravagent Grand Parade.

Katherine Cheng is a documentary photographer and videojournalist based between Toronto and Hong Kong, covering breaking news, daily events, and feature stories.